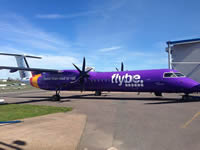 Europe's largest regional airline fell into administration just after 03:00 this morning, 5th March 2020, with all flights grounded and the business having ceased trading "with immediate effect".

Staff at the airline, which was based at Exeter airport, were in tears as the news unfolded. An email was sent to the airline's 2000 staff a few hours before the official announcement. Mark Anderson (Flybe boss) emailed the airline's staff to say it was "shortly being put into administration" - pointing to the impact of the Coronavirus outbreak as a cause, as bookings are 50% down this month since the outbreak increased. Some staff found out whilst sat on the airport tarmac across the UK as their flights were delayed and then eventually cancelled.

Passengers have praised crew and ground staff for how professional they dealt with the unfolding news, whilst staff worried about their own futures finding out they had lost their jobs infront of hundreds of passengers.

The airline was thought to of starved off failure earlier this year when the Government gave them a potential tax break and the take over last year by a consortium called Connect Airways; a joint venture by Virgin Atlanic and Stobbart Group. But its thought that the Government changed their mind and the additional funds desperately needed by the airline have no longer been available.

If your flight is to/from Teesside Airport, as above, you should travel as normal as Eastern Airways operated these flights on Flybe's behalf and are NOT affected by Flybe's collapse. Your flight will operate as planned, and you should arrive at the airport on time. Don't worry about your paperwork saying Flybe, this is still being operated by Eastern Airways and you do NOT need to contact anybody before you set off.

If your flight is to/from Newcastle Airport, those operating to/from Aberdeen will continue as normal as these were provided by Eastern Airways. Those between Newcastle and Southampton/Exeter are CANCELLED as these were operated by Flybe. You should NOT travel to the airport and should make alternative arrangements.

Flybe operated code share flights where you could connect to/from other carriers. If you have a booking that had a Flybe operated flight as part of your connections, you should contact the airline you are connecting from/to for advice.

Flybe did NOT operated ATOL protected flights so you are not entitled to a replacement flight and the UK Government will not be putting on rescue flights because most of those operated by Flybe were UK domestic flights, especially at this time of year. There are plenty of alternative options with other airlines, coach or train companies.

If you booked by CREDIT CARD and your flight cost £100 or more you can put in a claim with your card provider and you should contact them directly to discuss this further.

If you booked by DEBIT CARD for you maybe able to claim via your bank's charge back scheme for not receiving the service booked. You should contact your bank directly if you have paid by Debit Card.

If you booked by PAYPAL, you should contact Paypal for advice.

Alternatively if your travel insurance has "scheduled airline failure" protection you should make contact with them directly.

LNER, Transpennine Express and CrossCountry trains are accepting Flybe customers and staff on their services FOR FREE to help people to still get to where they need to be in Standard Class accommodation on their trains. LNER is accepting those affected until end of the day on the 11th March, CrossCountry until the end of the day on the 12th March and Transpennine Express (and all other First Group train operators) until midnight on the 15th March 2020. All customers need to do is show a valid boarding pass, flight confirmation or Flybe staff ID card to travel.

If you're travelling to/from the North East and Southampton/Exeter in the future we recommend travelling by train (click here) or by coach (click here.)

easyJet and Ryanair have also announced "rescue" fares but these are not really going to help North East travellers on Flybe routes. Some train companies are also offering free travel for those affected today, 5th March 2020.